Tonight I’m parked within a short walk of the Florida state line. My speed run south to get away from the cold has concluded. I’ve actually been in above normal high temperatures since I reached Virginia on Tuesday. It was in the eighties here today, but a cold front complete with thunderstorms is moving through that will usher in below normal temperatures over the next week. Now that I’m in the better weather zone, I’ll be staying at each stop much longer. I’ll be here for a week.

Since I had less than one hundred miles to travel today, I spent some additional time watching the birds in the pond this morning. The swans may be considered an invasive species, but they are a pretty bird that is interesting to watch. One of the pairs that inhabit the pond were doing their grooming along the shore right near my RV home. 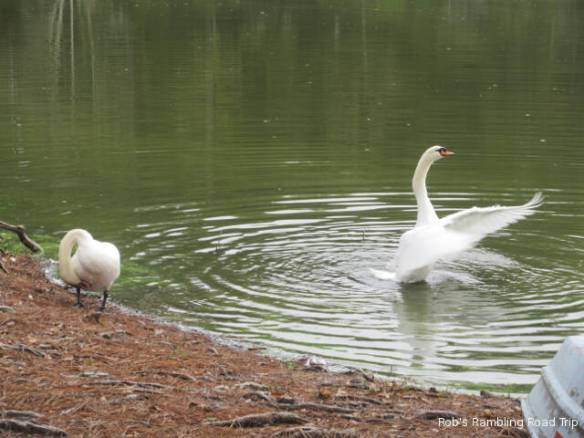 A pair of swans completing their morning grooming.

I pulled out of the campground around 10:15. My first stop was the gas station. It was a long and frustrating stop. I pulled into the station and found a lane that I could safely get in and out of. There was a car at the end of the line that didn’t have anyone around. I assumed they were inside paying their bill after pumping, so I pulled in behind them and waited. Two or three minutes later a women got out of the car and started to fill the tank of the Town and Country Minivan from Ohio. She pulled one card out of here wallet and passed it through the pump. It didn’t work so she started over with another card. After two or three more minutes she had the pump running to fill the tank. I really don’t think she had any idea the station was busy. There was already a car behind me waiting. Once she finished pumping she went inside the station building. I’m starting to get a little frustrated, but thought maybe she just needed to get the receipt. With the car in tow, I can’t back up my RV or do much other than wait. Close to ten minutes later she came out of the building with a grocery bag full of what looked like junk food. My hopes were rising, but it wasn’t to be. She got in her car and I watched in her rear view mirror as she fussed around then connected her seat belt. A normal person would have started the car and departed. She picked up her bag of groceries and started to eat. Who knows how long that would have lasted. At that point I lost it. My horn was sounding in her ears and anyone else at the station. She half got the point. She pulled her car forward just far enough that I could reach the pump. By the time I was through pumping my gas she was gone. It was near 11:00 when I left the gas station. I was probably at the station for forty minutes to put in $95 worth of gas.

The trip south on Interstate 95 was a rough one. This stretch of highway has a big problem with the transitions between roadway and bridges. The dips in the road surface before and after the bridges kept the coach bouncing. If it were only a few bridges it wouldn’t be a big deal, but this section of highway paralleling the coast crosses many creeks and marshes. I stopped at a big rest area about halfway to my destination so I wouldn’t arrived too early and completed my travel day around 1:30 at the Jacksonville North St. Marys KOA. It is a nice, easy to access campground that I’ve stayed at before. I’ll be here for a week. 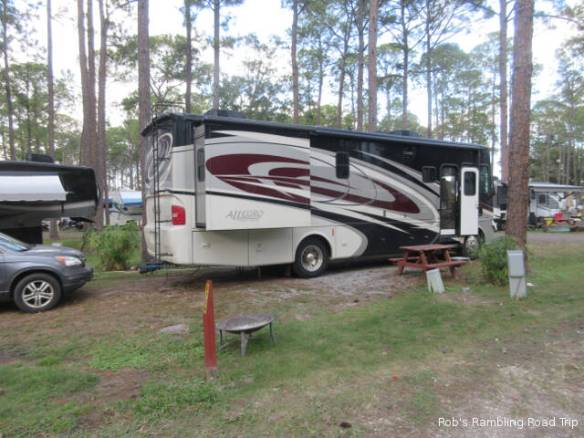