The temperature got down around freezing in this area last night. We are experiencing a stretch of below normal temperature. The inside of my RV home was in the forties when I got up this morning. The high temperature for the day was only around fifty and for the first two thirds of the day a strong west wind was blowing.

Fishing boat passing under the Bourne Bridge over the Cape Cod Canal.

Thinking it was a nice sunny day I got on my bicycle for a long awaited ride along the Cape Cod canal service road. When I got down onto the canal road the fifteen to twenty mile an hour wind hit me square in the face. The wind chill brought the already cool temperature down even more. Today was not going to be a bicycle riding day. I locked the bicycle up back at the RV and took a walk instead.

I walked about a mile into the wind and then let it add a little push on my return walk. Later in the day I went for another walk and found the wind just about gone. There was only an occasional breeze. The down side is that the clear sky had given way to cloud cover, so any chance of it warming up was also gone. The second walk was shorter than the first, but it was exercise. It burnt a few of the calories from my big mid afternoon meal. I cooked a big pork chop and potatoes and onions on the grill. 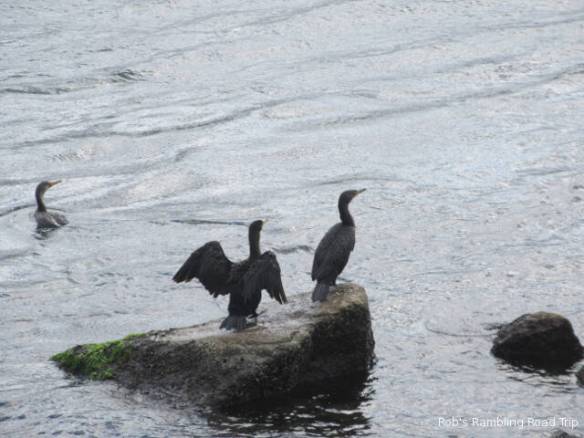 Small Cruise Ship Viking Sea emerging out of the dark.

It used to be necessary to listen to the marine radio channels on a scanner for ships to check into the Cape Cod canal controller to know when a ship was coming through the canal. Now you can just query a web page for the marine traffic in the area. You get to see all of the ships in the area that are approaching the canal and you can get information about the ship. It gives you much better warning on the arrival of ships, but you don’t get some of the personality of the ships captains that you got listening in on the radio. Maybe I should do both.