Last night I was surrounded by activity in the campground. Around 8:30 the RV across the road packed up and departed. It had only been here for a couple of days and I hadn’t seen anyone around since the first day. Then around 11:30 a trailer from Washington State arrived at the site next to me. It came with two extra cars and about seven people total. They made enough noise getting setup to wake this side of the campground. I was still up watching the Red Sox victory over the Astros. I assumed they were arriving for the weekend, but they were gone by 9:30 this morning. The last change in my surroundings was the departure of a long term resident diagonally behind my site. For some reason they departed around six this morning with enough noise that I woke up. All of those sites are now full for the weekend. 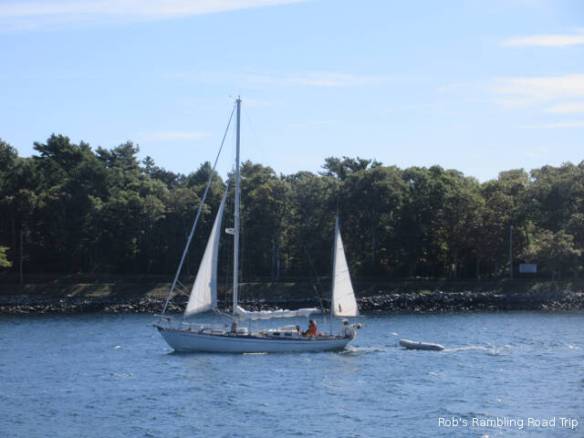 Sailboat getting a little help from the wind.

Plenty of power to push into the wind.

It didn’t get as cold last night as the forecasters were warning. I don’t think we had a freeze in this area. The temperature inside my RV, when I was rudely woken at six, was in the mid forties. It was still cold enough that I had to turn on Noisy Nellie the furnace. The inside warmed up quickly and the outside made it to around sixty by mid afternoon.

Fish and Chip Platter at the Lobster Pot in Wareham, MA.

I went back down to the Cape Cod canal area again today. The goal was to get Fish and Chips for lunch and to stop at Walmart for some groceries. For good measure, I threw in another walk along the side of the canal. There was a strong wind out of the west today. It made the return trip to the car more difficult, but I was dressed for the wind chill. On today’s walk I saw many more fishermen than on previous walks. The arrival of true fall may have brought the fish back into the canal, but I didn’t see anyone catch anything.