Today was a relatively short travel day from the Little Rock area to the Memphis area. It was a journey of about 150 miles. Yesterday’s storm were over and the temperture was back into the low 90s with plenty of humidity. There was also just enough wind to be noticeable. I needed to be alert for sudden gusts, but I could still take one hand off the wheel when necessary. 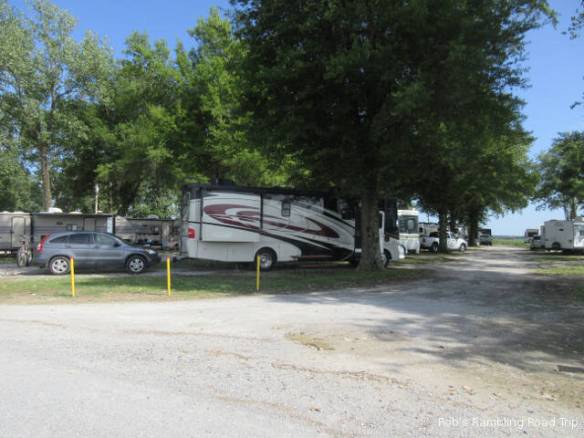 Site 25 at the Memphis KOA in Marion Arkansas.

I didn’t rush getting ready to travel this morning. Checkout time wasn’t until 3PM so I had plenty of time. I left my site at eleven thirty to dump the holding tanks at the dumping station. It was necessary to traverse an entire loop of the campground to get to the dump station. Once the tanks were dumped I still had too hitch up the car to be toad. I finally departed the campground a little after noon. A very late starting time for me.

The trip was not without its challenges. The usual issue of finding a suitable gas station to fill the tank was one of today’s challenges. I had used Google Maps to scout out the locations to buy gas. I missed the exit for my first choice. It turned out to be in a hilly area that Google Maps didn’t clue me in about. I got off the highway at the exit for my second choice only to find one station closed and two others that were not easily accessible. Back on the interstate heading east I watched the gas gauge fall below a quarter tank. I still had plenty of range, but I don’t like to get that far down. Using the highway advertisement signs I picked an exit with four gas stations hoping one would be accessible. I got lucky and found two stations I could get in and out of with out issue. The good news is that I saved seven cents a gallon over my first choice. For 57 gallons a gas that was about four dollars of savings.

The road conditions today were pretty good compared to some of the interstate highways I’ve been on lately. The only road condition challenge was in the eight mile stretch they were widening and repaving the road. Traffic came to a standstill while everybody worked their way into a single lane. The state of Arkansas started warning about the merge ten miles ahead of time and provided much better signs near the merge than some of the states I traveled through.

I arrived at my destination a little after three. Setting up in the ninety plus degree temperatures was not fun. I took my time completing the setup. Once the air conditioner got the inside temperature under control I took a break. There really is a difference between the “dry heat” of the southwest and this heat with humidity. I didn’t react to the high temperatures last summer nearly as much as I am this humid heat. 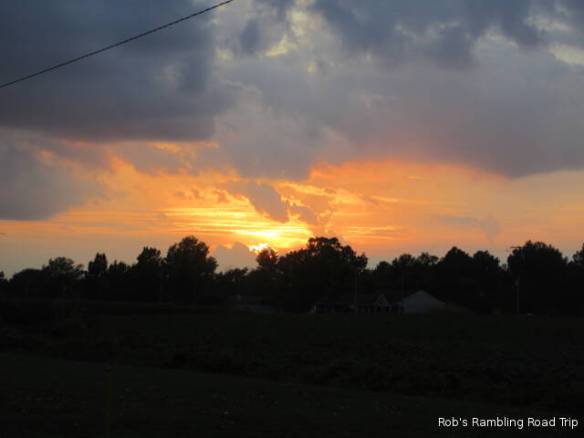