There were scattered showers in the area today. One storm passed by close enough to provide about ten minutes of rain around noon. Other storms went around this area to the north. The occasional clouds kept the sun from heating everything up as warm as yesterday, but the humidity was still present. The temperature peaked around 90 degrees.

Marching to the water for an afternoon swim. 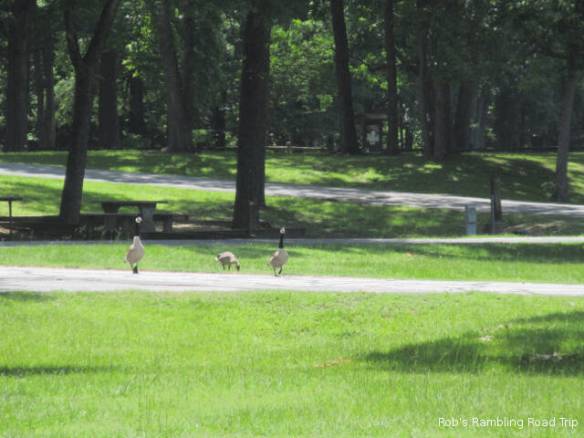 I spent the day at home. I finished setting up the campsite for my two week stay and got familiar with the campground. This is the type of campground I like the best. There is a reasonable amount of space between sites, the area has trails to be near the wildlife and there is another form of entertainment. In this case the other form of entertainment is the Arkansas River with barge traffic and recreational boaters.

Clouds building to the northwest.

The storm area moves east on the north side of the river.

Looking east as the storm area moves on.

So far I’ve seen one tug pushing a set of barges each day. Monday evening one was headed up river and this evening one was headed down river. There may have been another one or two, but I didn’t see them. They slip by very quietly. Most of the recreational boat traffic is in the evening. The boat ramp is near my site. In the afternoon fishermen start arriving to launch their boats for a few hours of fishing in the river. I understand that it is a great fishery for large mouth bass. There is also a marina just up river from here. So far I haven’t seen much activity there. Maybe the weekend will change that. 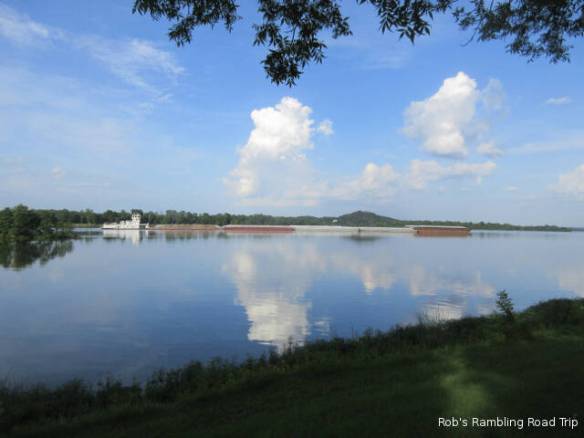 Tug pushing a string of barges down river in the evening.

I haven’t finished exploring all of the park. So far I’ve checked out about two thirds of the water front area. There are other camping loops and a trail through the area inland from the river that I still need to explore. The heat and humidity have kept me from wandering too far. Staying out of the sun and in the breeze it’s not bad. The breeze isn’t constant and doesn’t seem to reach to far inland from the river bank.