The calendar may not agree, but summer has arrived in this area. The daily temperatures are consistent with July norms. It was very humid with highs in the mid 90s today.

Getting packed up and on the road was difficult this morning. For some reason people on both sides of me wanted to talk while I was out trying to get ready. This can be a recipe for disaster. Getting interrupted in the middle of some tasks can leave critical things incomplete. The only way I have to safeguard that everything gets done is start over after the conversation is complete. I wanted to leave by ten, but didn’t get on the road until 10:30.

Most of my journey south was on US 65. It had some sections that were divided highway with cross roads and other sections that were just two lane roads. Almost all of the road was a twisting, turning, up and down ordeal. It really required attention to driving. There were many sections that could benefit from some earth moving. Blasting out some ledge and using it to fill in other areas would straiten the road and reduce some of the grade. I’m not a civil engineer, so I don’t know if there are technical reasons it can’t be done, but cost savings would seem to be one reason to subject the driving public to the roller coaster approach. Today I was using the brakes more than I want even with gearing down for the down hill sections. It seemed like there were many thirty mile an hour curves near the bottom of the hills. Some of the thirty mile an hour curves ended in a school zone or at a traffic light. It really wasn’t a fun drive. 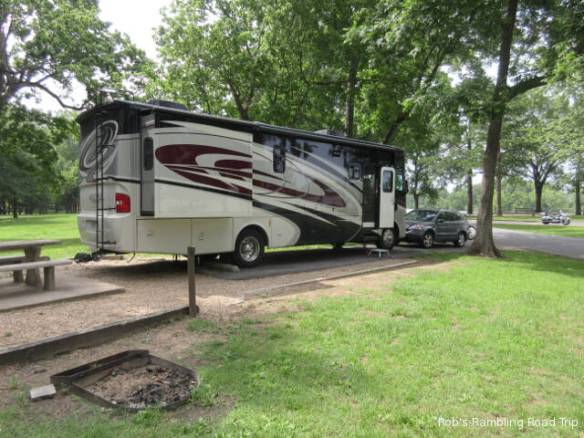 Site B2 at the Maumelle Army Corp of Engineers Park.

I arrived at the Maumelle Army Corp of Engineers park northwest of Little Rock around 2:30 in the afternoon. This campground is right on the banks of the Arkansas River. Getting setup was a challenge. The site slopes some from back to front so I needed to used some blocks in addition to the leveling jacks. That alone isn’t a big deal, but when added to the humidity and having to back in between two trees, it was slow going. By the time I was finished setting up I was soaked with sweat. 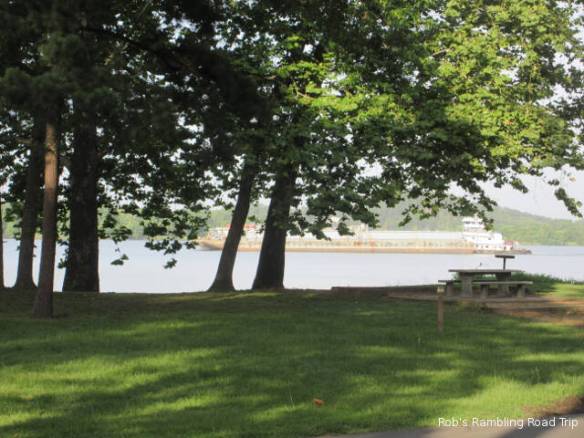 View from the front of my campsite of a barge heading up river this evening.