Today continued the trend from the last couple of days. It was a little warmer, a little more humid with a little less wind. The result was a day that is approaching the uncomfortable stage. You can really feel the heat in the open sun. It is still fine in the shade. 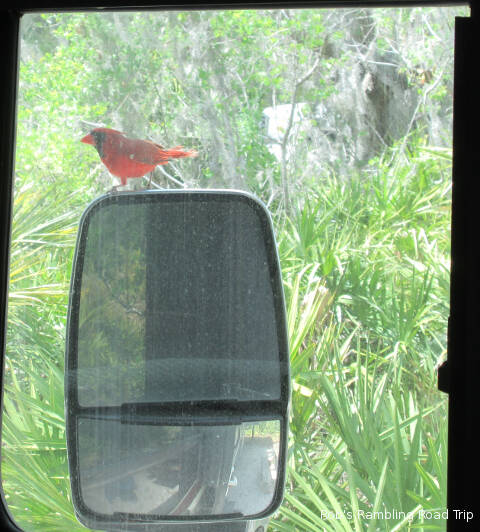 My friend the neurotic cardinal.

My day started slowly again this morning. While I lingered over breakfast my “friend” the neurotic cardinal returned. He is graduating from pecking the rear view mirror to ramming the windows and sides of the RV. He hasn’t reached the level of his cousin the crazy cardinal, but he is getting more annoying. I’m not sure if he’s defending his territory from reflected enemies or if he’s trying to impress a female with his ability to bounce off walls. I’m thinking about getting a squirt gun. 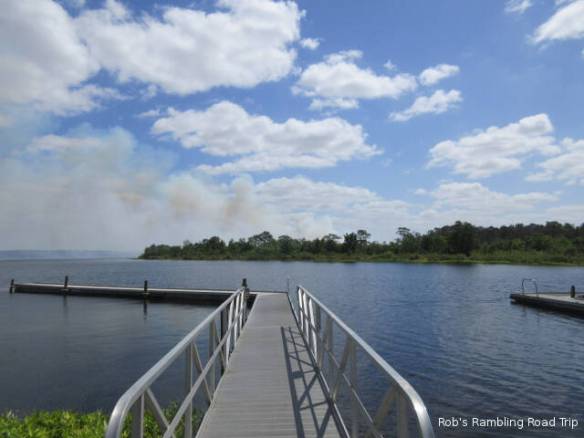 Smoke from a fire near the road to the east. With all the concern about forest fire danger in the area, seeing smoke over the lake was a concern. If I had to evacuate in a hurry, what would I take short of everything?  I didn’t have to find out. The fire was put out.

The last couple of days it has been too windy for the birds on the pillars. They were back today. The haze in the background is smoke from the nearby fire.

The campground is now occupied primarily be families from the local area. This is school vacation week. Every day smaller trailers, tent trailers and tent campers replaced the bigger out of state rigs. Some of the trailers look like they would have difficulty moving more than a few miles. There are older units that are patched up and a couple even have plastic over the roof to keep the weather out. The roads and paths now have kids riding bicycles and scooters instead of older folks walking dogs. It is also much more alive during the day with the kids playing and the parents yelling.

All of these changes seem to confirm my suspicion that snowbird season is over and the weather is right for the locals to get out in their RVs. When I look at the various reservation systems for campgrounds in the state, I find that the middle of the week has openings but the weekends are full. During the earlier part of the year most of the parks were full with only a day here or there available.

I think this guy is posing for a picture. Actually it froze when I stopped my bicycle ten to twenty feet away. There were three Gopher Tortoises in about fifty feet along the path. This one was the most photogenic.

I’m all set for reservations for the remainder of my stay in Florida this spring. I need to work on the fall and next February and March. The window for reservations in the state parks is eleven months and for federal parks it is six months. On Sunday morning April first at 8am I’ll be trying for reservations starting March 1st of 2019. Hopefully, the Easter holiday will keep the number of people competing down. Last year, I started at 5am west coast time on April 1st and didn’t succeed until April tenth. As I’ve said before I hat having to make reservations.