The first half of the day was cloudy and cool. During the afternoon the clouds started to clear and the sun warmed the air into the high fifties. The cloudy start to the day heavily influenced my day. My motivation to leave the RV park was hidden with the sun. I stayed home all day. 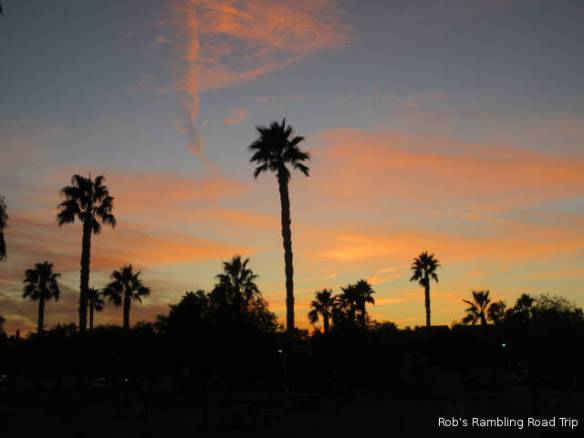 Sunset this evening at the Las Vegas RV Resort.

Other residents of the RV park weren’t similarly influenced. A number of residents checked out and resumed their travels today. I’m not sure leaving the day after Christmas was a good idea. The TV was showing video of the backup on the highway leaving town. Many other residents haven’t returned from their holiday travels so the quiet relaxed atmosphere at the RV park continues.

I only have three weeks remaining before I start my journey back to the east. The east bound journey should be slower than my west bound trip last February. I came from Florida to Arizona in eight days. I have about thirty days from the time I leave Las Vegas to my first reservation in Florida for my east bound trip. My west bound trip included many three hundred mile plus days in a row. I may have a few long driving days going east, but I’ll be staying at many stops for more than a single night. My first stop after leaving Las Vegas will be in the Parker Arizona area for three nights. I’ll take two days to get to the Benson Arizona area next. My stop in Benson will be for a few days to tour the Tombstone AZ area. After that I’m still working with Google Maps, campground listings and the calendar to figure out my plans. One big goal is to go through Houston TX on a Sunday. Tuscon, El Paso and San Antonio are also complications, but I’ll deal with them if I can minimize Houston. I want to make reservations for a few of the nights in February. I’m worried about Mardi Gras on the thirteenth and Presidents day on the eighteenth.

The east bound travel window shrunk when I decided, over the weekend, to attend the Passport America Rally in Fort Walton Beach Florida starting on the 19th of February. It’s on the way and sounded like fun so I made a reservation. That will be the first of two rallies I will be attending in 2018. I’ve already committed to attend the Escapees Escapade in Sedalia Missouri the last week in May. I’m not going to plan my travel to attend these events, but when they are scheduled in the areas I’m traveling through I’ll consider attending. 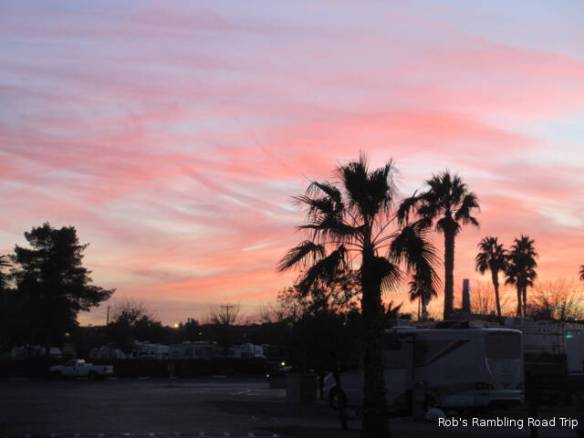 Another view of sunset at the Las Vegas RV Resort.