I got packed and ready to leave by 9:30 this morning. The forecast called for hot weather with the possibility of thunderstorms late in the day along my route. I’ve been in areas with high temperatures no greater than 80 since early May. Yesterday’s mid 80s and today’s 90s are a big change.

My drive today was on Interstate highways all the way. I started going east on Interstate 90, then south on Interstate 15. Overall I traveled 280 miles in a little under five hours. With the exception of two areas of construction and a few areas of unfavorable wind, it was an easy drive. The two passes over the Continental Divide were inconsequential. If it wasn’t for the sign a few miles south of Butte, I wouldn’t have known I was crossing the divide at 5900 feet. The second crossing at the Montana-Idaho line was even less remarkable. The road traveled through high plans cattle land most of the way through Montana. In Idaho the road steadily lost altitude until it opened up onto the Snake River Plain. 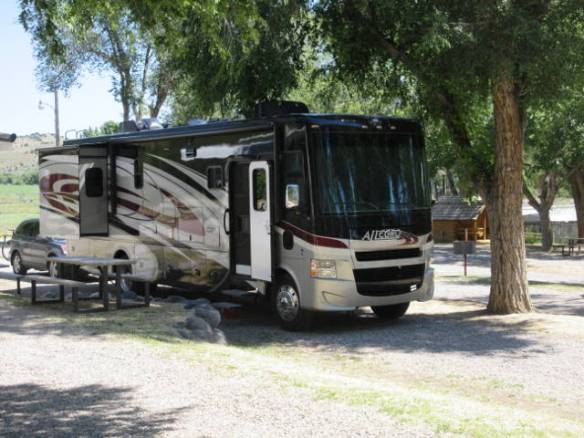 Site 35 at the Pocatello KOA.

I’m in Pocatello Idaho for the next two nights. A line of thunderstorms is headed this way from the southwest. Tomorrow has a similar forecast, but the daily high temperature isn’t supposed to be as high. I don’t have any specific plans for tomorrow. I’ll make a run to the grocery store, but will probably just relax most of the day. On Wednesday I’ll move west to Twin Falls for another couple of nights.