I have developed a habit of touring the area on my first day at a new location. That is exactly what I did today. I drove north from Arco ID about 75 miles to the town of Challis ID and back.

Picture of Numbers Hill in Arco ID. Each high school class since 1920 has painted their year on the side of the hill.

One of the big features in Arco is a rock hill called Numbers Hill. Since 1920 each graduating class at the local high school has painted their graduating year on a rock overlooking the town. This is one of those classic small town traditions. I can just imagine each class picking out their spot on the hill and figuring out how to paint in that location. 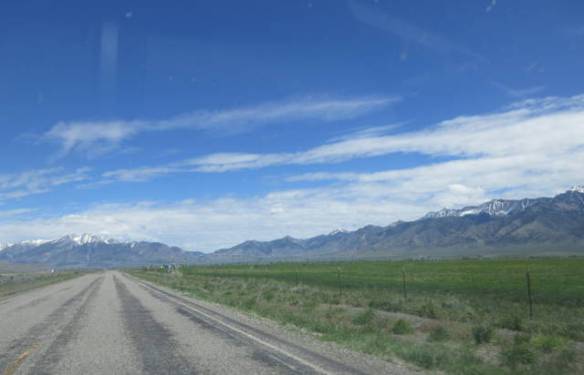 US 93 heading northwest from Arco ID.

Panorama of part of the Little Lost River Range. Mt Borah is 2nd from the right.

Mt Borah on the left.

The first twenty five or so miles heading northwest are in a broad valley with large tracts of cultivated land. The Little Lost River Range of mountains makes up the north side of the valley all the way. After the town of Mackay the terrain changes. The road gains some altitude and passes by the Mackay reservoir. The land use changes to cattle ranching in this area. The mountain peeks get higher with more snow as the road continues northwest. Idaho’s highest peak, Mt Borah at 12,662 feet, is in this area. The road passes over the Willow Creek Summit at 7,180 feet before dropping back toward the town of Challis.

One of Idaho’s favorite road signs seems to be “Game Crossing” warnings. They don’t warn about specific species just “Game”. Most of the animals I saw were cattle behind the fences that lined both sides of the road. Any Game that was going to cross the road would have to deal with the cattle fences. I saw one group of light brown and white deer sized animals that I think were Pronghorns. My uncertainty comes from the Internet implying there were very few in Idaho. This herd was on the inside of the cattle fence trying to find a way to the road area. Later I saw a single deer on the road side of a cattle fence trying to find a way out of the road area. Traveling at sixty five miles an hour it wasn’t possible to snap a picture. I was passed them before the idea occurred to me.

Cloudy gray skies replaced the blue sky over the mountains.

I hadn’t planned on turning around at Challis and returning on the same route, but the option was a long way around through the mountains. The deciding factor was the weather. The blue sky was rapidly getting filled with gray clouds. Thunderstorms were in the forecast as a possibility. I took the safe approached and returned the way I came. The alternative was about one hundred and fifty miles longer mostly through the mountains.