There was a small regular road sign on highway 93 that directed me onto the west bound road. In indicated that Balanced Rock was twenty miles down the relatively narrow farm road. The road was straight for almost the entire distance. The road went up and down over rises so you could never see very far ahead, but it didn’t turn left or right. The sides of the road were lined with fields in various stages of planting. Some were hard packed dry dirt, some had been turned over in preparation for planting, still others were lush green with growing crops. I’ve decided that some of the fields may be a crop in the onion family, but for the most part I’m just guessing. Every time trees appear ahead a farm house and barn complex comes into view. The question I have to ask is which came first, the trees or the buildings. It could be either. Trees are usually located with water, but so are people. 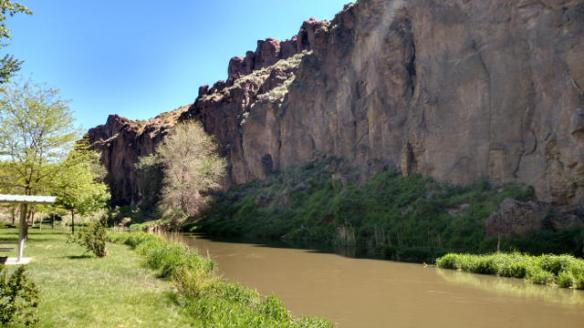 I kept track of the mileage. Around 19 miles into my westward trek, the speed limit dropped from 60 to 35 and the road turned to the right. Suddenly the road twisted, turned and dropped into a big whole in the ground. The road bottomed out in the Salmon Falls Creek Canyon. Balanced Rock Park was on the left after crossing a bridge over the creek. It is a nice county park between the creek and the rock wall of the canyon. 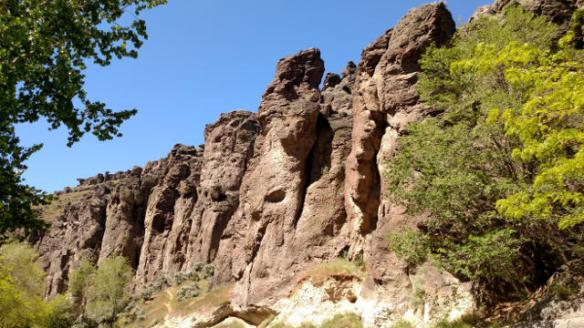 The park has picnic tables and bathroom facilities. The water in the creek is running high, but green grass and shade trees are prevalent in the park. I parked the car and got out to look for the Balanced Rock. I studied the tops of the rock walls on both sides of the canyon. There were several spires that could support a balanced rock, but nothing that looked like the pictures I’d seen.

It is nice park that provides shade and natures symphony. In addition to the sound of the creek, which looked more like a small river today, birds, nesting in the rock ledges, were keeping a steady stream of calls and wing flutters as they moved around. Unfortunately, I still hadn’t found the Balanced Rock. 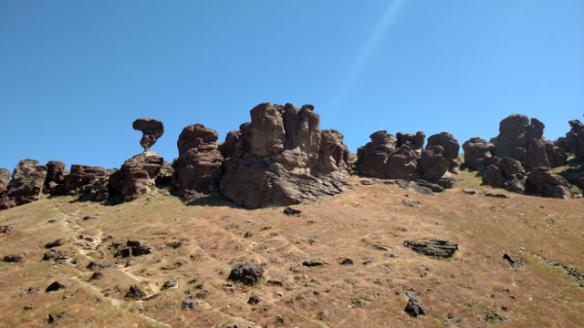 Balanced Rock nestled in with other bolder formations on top of ridge alongside the road on the west side of the canyon.

As I was leaving the park I read the park entrance sign more closely. A faded arrow indicated that the Balanced Rock was a mile further out the road I came in on. I drove out of the canyon on the west side of the creek and near the top was a pull out to view the Balanced Rock. Other than a picnic table under a roof there was nothing notable about the pull out, but up on the top of a rock wall on the south side of the road was THE Balanced Rock. It is interesting, but the park in the canyon below was more impressive (IMHO). 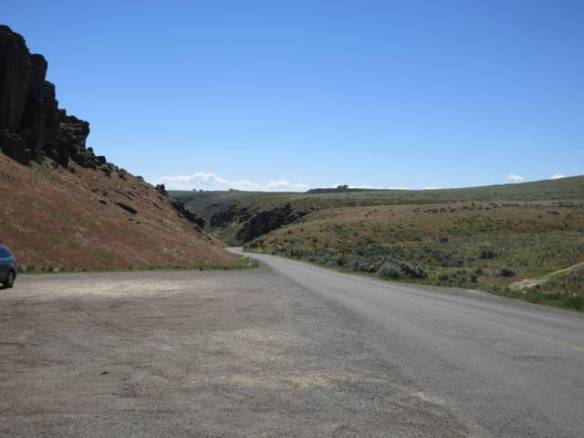 Looking back east across the top of the canyon formed by the Salmon Falls Creek. The flat land to the east contains all of the farmlands I passed through to get to the Balanced Rock.

After taking a few pictures of the rock and the surrounding area I continued on the road to the west. It started turning south and eventually intersected US 30. There were no signs on route 30 to direct one to the rock. I’d been by the intersection on Saturday, but there is no way I would have turned off US 30 at that location even if I had a GPS telling me that was the way. The road just looked too sketchy. The road in from US 90, though long, was enjoyable and much better than the road from US 30.