Today completed my first of two weeks here at the Army Corp of Engineers Maumelle Park. It was a very similar day to last Monday. The temperature was a little over 90 degrees with high humidity. A shower passed through the area late in the afternoon. It dumped a lot of rain in a short period of time, but there wasn’t much wind or signs of a thunderstorm. 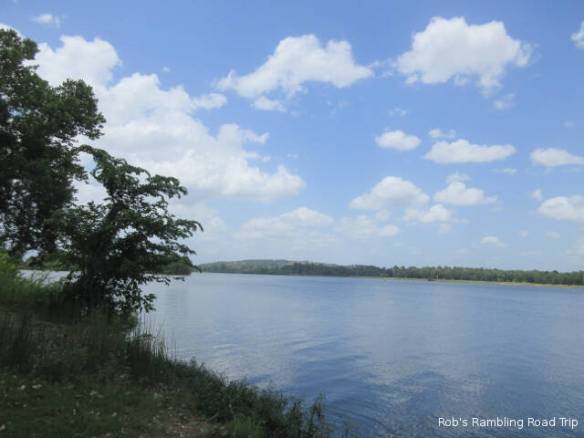 Another view of the Arkansas river with light fluffy clouds before the rain shower moved in.

The campground really emptied out this morning. I estimate that half the sites were empty early this afternoon. By evening most of the vacant sites were filled. The fishermen were also back to their weekday pattern. There is very little activity until the work day starts to end. Many people come out to get a few hours of fishing in the evening. I actually saw one of the rare people fishing from shore catch a bass tonight. It was a good size fish, but not big enough to meet the fourteen inch legal size for Large Mouth Bass.

These geese were spooked by something. They were moving rapidly toward the water.

The geese were back around today. I don’t know where they were hiding out yesterday. In some ways I wish they would go back into hiding. They make walking around difficult. You need to watch where you step and you need to be careful not to get between the adults and juveniles. An angry goose is not something I want to deal with. 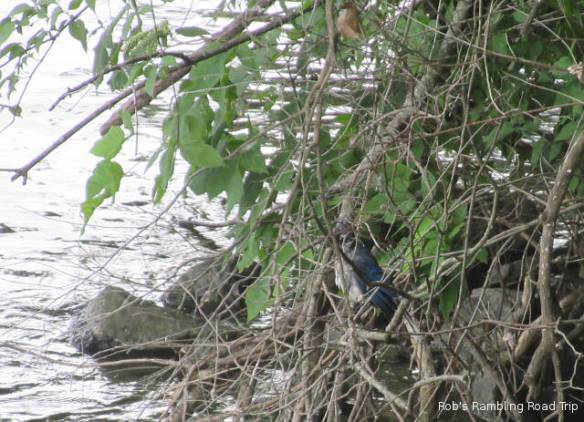 A blue bird trying to dry off after taking a splash bath in the river’s edge.

Besides getting exercise walking around the park and watching the activity in the river I worked on planning out my travels for the next few weeks. When I leave here next week, I’ll travel to Memphis for a few days. I’m going to spend the Fourth of July holiday in Mississippi at one of the casinos in the Tunica area. I believe there are two fireworks shows and a couple of other fun things going on over the holiday. After the holiday I’ll head east across Tennessee. I’m going to skip the Nashville area and stop in the Pigeon Forge area instead. Finding a place to stay in the Nashville area was turning into a real planning obstacle. I may take a day trip to Nashville from about sixty miles away. After Pigeon Forge I will probably stop in Asheville NC unless I come up with a better idea. I’m only about half interested in the Biltmore Estate. All of this planning will get me into the coastal North Carolina area by the end of July. I’m starting to look at the Outer Banks for early August. 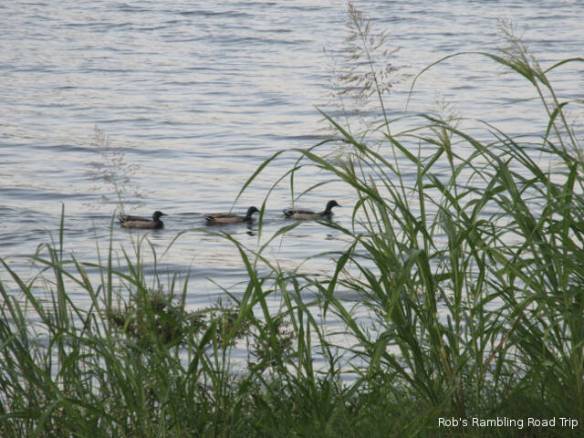