And now we return to regular blogging.

I got back to Jacksonville FL last night. It was a long day of travel. Most of my time was spent waiting for a plane not actually flying. It’s my own fault. I booked a flight with a long layover in Baltimore, then I got to the airport in Boston two hours early. The flights were on time and were in the air about two and half hours total with an hour or so at the gates and on the taxiways. I spent 5 hours in the airports. I got back to my RV home at about 10:15PM after leaving my NH house around 11:30am.

I returned to cooler weather than I left last week. The temperature peaked this afternoon in the mid 80s with less humidity and more wind. A line of thunderstorms came in off the Atlantic Ocean to cool it down more. The big concern is what the impact to this area will be from Tropical Depression No. 9 that just entered the Gulf of Mexico west of Key West. Jacksonville is currently in the middle of the projected path for Thursday of this week. It is not currently projected to become a hurricane. 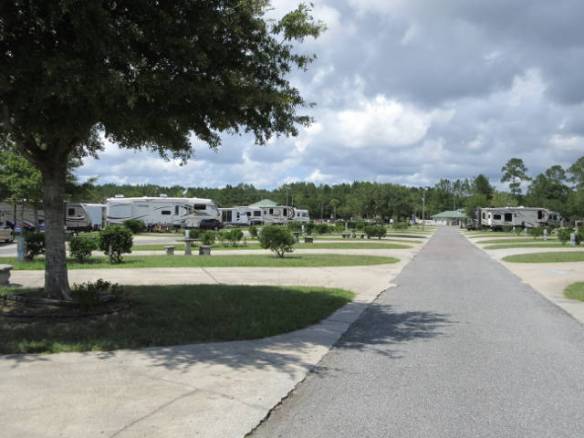 The empty sites at the campground

Things have changed a little at the campground. A number of the RVs that were here when I arrived two weeks ago have departed. Since I booked for a month, my site is at the edge of the short term area. Looking across the short term area there was only one unit left this morning. A few more arrived this afternoon. I don’t think the departures are weather related. None of the long term, yet mobile, RVs in the park are leaving. but I am watching the forecast closely. I might pull up stakes and move tomorrow, if the forecast warrants. In what direction and how far remains is unknown for now.

The activity for the day was primarily recovering from travel and restocking the refrigerator. Other than a run to the Walmart Supercenter for a big load of groceries, I spent the day at home.